You are here: Home / Archives for Vietnamese coffee 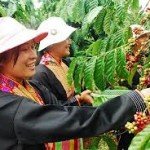 Vietnam has a rich history built in coffee, after the French introduced it in the 1700's, and is historically one of the most important countries involved in the cultivation of coffee. Surprisingly, Vietname is the second largest producer of coffee in the world, second to Brazil. Many believe soon it will hold the spot as largest exporter.   Perfecting the bean … END_OF_DOCUMENT_TOKEN_TO_BE_REPLACED