You are here: Home / Coffee / Introduction to Vietnamese Coffee

Vietnam has a rich history built in coffee, after the French introduced it in the 1700’s, and is historically one of the most important countries involved in the cultivation of coffee. Surprisingly, Vietname is the second largest producer of coffee in the world, second to Brazil. Many believe soon it will hold the spot as largest exporter. 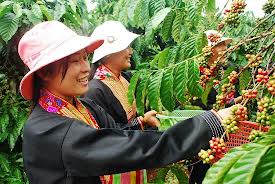 Perfecting the bean has been a significant task for Vietnamese coffee, and their success in cultivation has a lot to do with their geography. The mountainous regions and various altitudes provide the perfect location for many different types of beans to be grown. As a matter of fact, half a dozen species and varieties are grown here, including Arabica, Robusta, Excelsa, Liberica, and Catimor. The mountainous regions in Vietnam make for various micro-climates, allowing for a wide variety of beans to be grown. This is also responsible for the great multi-origin blending you can obtain from Vietnamese coffee.

Vietnamese roasting techniques are also very unique, and contribute a great deal to the diverse range of flavors and complex mouth feel you’ll experience in your cup. Beans are most often roasted in a type of butter oil, or occasionally vegetable oil. In a time where Robusta was often picked before ripening, a small touch of sugar, vanilla, or cocoa was also added to the roast to even the color of the beans, but this is not done often any longer. The oil coats the beans during the roast and promotes a more even roast.

Vietnamese grinding and brewing techniques are also imperative to thoroughly enjoying your cup of Vietnamese coffee. The grind needed is generally a course grind (similar to that needed for a French Press), then the coffee is placed in a low-tech metal phin filter and hot water is added. This is a common technique used to make great iced coffee as well.

Growing Altitude: Between 500 and 700 Meters

Harvest Seasons: Between November and April