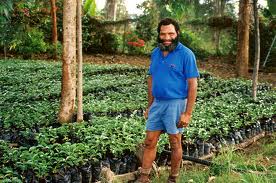 1% of the world’s coffee comes from Papua New Guinea according to the United Nations Conference on Trade and Development. The industry is so large in Papua New Guinea that it employs approximately 2.5 million people, and is the country’s largest export after oil palm.

The majority of coffee is grown in the Eastern Highland Province, the Western Highland Province, and Simbu, with the majority of farming being handled by small farmers that own about 20 coffee trees planted in their coffee gardens alongside other crops. Mostly ‘certified organic coffee’ is grown here, which demands a slightly higher price in the fair trade market. About 87,000 hectares are under coffee cultivation currently in Papua New Guinea, and an estimated 280,000 smallholder coffee farmers and 660 large coffee farmers, of which have 1-30 hectares dedicated to coffee cultivation. There are also 65 large plantations. Outside of the growers, the country also has 18 registered exporters, 6,000 roadside buyers, and 51 registered coffee processors.

The most popular labeled coffee sold is labeled ‘PNG’, and it is produced in the Eastern half of the country. This label is made up of 2 varieties: the large estate coffees, and the small farmer coffees. Both are wet process coffees. Coffees are comprised of either the Robusta varietal or the Arabica varietal, with the Robusta having less flavor and poorer quality and often being used for instant coffee, and the Arabica being sold in higher end markets for use in making espresso, latte, and cappuccinos in Europe and America. Most of the beans used for planting were obtained through Jamaican Blue Mountain stock.

The Coffee Research Institute, established in 1984, monitors the coffee industry in Papua New Guinea. They have helped establish nurseries, issue licenses, allot land to farmers based on a tenure system, provide subsidies, and provide funding. This is all to support an effort to meet international standards of quality and to help achieve a productive economy by these plantations flourishing.

Papua New Guinea’s coffee is a layered coffee, with multiple taste levels. Most often found within a good cup of coffee from the country is a taste of mango, papaya, and other fruits. The coffee is known to traditionally have a very full bodied flavor and a sweet and pungent aroma. Also found within a good cup is a bright acidity, and sometimes even a hint of chocolate or honey.