You are here: Home / Coffee / Introduction to Hawaiian Coffee 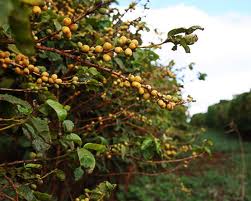 One of the most popular, and most well loved, coffee origins is Hawaii. You’re most likely familiar with Kona coffee, however very high quality coffee is grown throughout the state and its regions.

Coffee trees originally landed in Hawaii in the early 1800’s when they were brought over by the British warship H.M.S Blonde. Initially, the trees were planted in Manoa Valley on the island of Oahu, where they flourished and were soon introduced to other neighboring islands. In 1828, Revered Samuel Ruggles planted some trees on Capatain Cook, Kona. And, the North Shore of Kauai, Hanalei Valley, was home to the state’s first coffee plantation. Unfortunately, in 1858 the coffee crops were wiped out due to insects.

Kona island ended up being a perfect match f0r coffee, it was found. Kona boasts rich volcanic soil, farmers who are no stranger to hard work, and a perfect climate. The vast majority of Hawaii’s coffee, with the exception of just a few farms in other areas, is grown right in Kona. Other areas coffee is grown on the islands include: Mauna Loa, Ka’u, Puna, Hamakua, Kauai, Maui, Moloka’i, and Waialua.

What sets apart Hawaiian coffee is the fact that everything, from the planting to the picking, is done completely by hand. The great care taken in all the coffee processes is known to add a certain flair to the coffee and a nearly perfect cup. Every coffee is graded and categorized into one of six Kona grades:

Peaberry Kona Coffee – This is a pea shaped coffee bean, and is the result of only one coffee bean developing within a cherry, where there is usually two. This is the rarest of the grades, and hardest to find. The beans are small, but known to produce twice the flavor as its counterparts.

Number 1 Kona Coffee – These beans have a mild and nutty flavor and are medium in size.

Select Kona Coffee – Another small coffee variety that allows for  5% defects within the grade.

Prime Kona Coffee – Also known as “estate grade coffee”. These beans are allowed up to 25% defects.

Harvest Seasons: Between August and April