You are here: Home / Coffee / Introduction to Congo Coffee 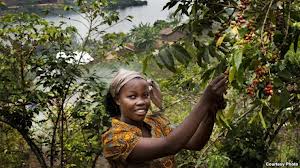 Coffee is actually the third most important export from the Congo, or Democratic Republic of the Congo. Coffee production comes from the provinces of Haut Zaire, Equateur, and Kivu, with an estimated 33,000 tons being produced in total in 2004.

Unfortunately, coffee from the Congo is not very consistently available. There is a lot of political unrest right now in this country, unfortunately, with much of it centering around the diamond and gold wealth found within the Congo. The conflict in the Democratic Republic of Congo is believed to be one of the bloodiest since WWII. However, recently elections have been held and there is hope for a stable government and a cease fire on the war that rages on in the country. Recently, some coffee has been exported from the Congo to the US, in fact, which can be seen as a positive sign. Currently, the coffee is being offered and sold at below fair trade level, but there is hope of fair trade levels being met in the near future.

Congolese coffee is actually known to be quite wonderful in taste. It can produce a very complex, yet smooth, cup, and feature hints of tangerine and maple syrup. It roasts well in any roast level. Some coffee houses are slowly getting some coffee in from the Congo regions and are offering tastings and understandingly expensive one pound bags. Hopefully, we’ll start to see more offerings in the near future.