You are here: Home / Archives for Symphony

There's a lot more to Colombian coffee than the icon Juan Valdez - the beloved and famous fictional character that appeared in National Federation of Coffee Growers of Colombia advertisements since the 1958. Colombia has a deeply entrenched history with coffee. The first coffee crops in Colombia can be traced back to the year 1730 after the Jesuits brought coffee seeds … END_OF_DOCUMENT_TOKEN_TO_BE_REPLACED

In the early 19th century coffee was first introduced to Ecuador, where it remained it's largest export crop up until the 1970's. After the 1970's and continuing through today, oil, shrimp, and bananas have become Ecuador's main exports. Today, Ecuador accounts for less that 1% of the world's coffee production as the amount of land in cultivation and crops going unharvested … END_OF_DOCUMENT_TOKEN_TO_BE_REPLACED 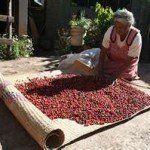 Once a coffee tree is ready for harvest and the cherries are picked, you may have wondered what happens between then and your coffee cup. Coffee can actually go through one of three different processing methods before it's roasted, ground, and brewed for your enjoyment. The method's used will vary from country to country and region to region. Here's an easy description of these … END_OF_DOCUMENT_TOKEN_TO_BE_REPLACED

The production of Arabica coffee in Sumatra began in the 18th century when the Dutch colonized the country. It was first grown in the northern regions around Lake Tawar, and still is today. However, it has spread to being grown in other areas as well such as Lake Toba in the southwestern region. You may already be familiar with the term "mandheling" in the coffee industry. … END_OF_DOCUMENT_TOKEN_TO_BE_REPLACED

Most are familiar with the term java as a reference to coffee in general, but the term actually derives from coffee grown on the Indonesian island of Java. In the early 17th century the Dutch brought coffee to the island of Java and coffee has been exported from there ever since. A rust plague hit the island in the lat 1880's and killed off much of the crops as it spread … END_OF_DOCUMENT_TOKEN_TO_BE_REPLACED